I Roderick Edwards am officially announcing the suspension of my campaign for president of the United States. When I started this effort in October 2014, before any major candidate had declared, I had proclaimed a very detailed and clear platform which included many of the aspects now being advocated by the Republican front-runner, Donald Trump. Further, I always understood this effort to be more theoretical than possible, since it is unlikely an independent write-in candidate could ever garner enough support, even though as I stated my views were already what the front-runner is now advocating and what many people support.


At this juncture, if I were running as a Republican I would be expected to unite around the Republican candidate for the Party's sake. But as an independent I am free to endorse or not endorse whomever I like. Since as I've pointed out, most of my initial positions are also being advocated by Trump, it seems logical that I would endorse Trump. At the mere mention of this potentiality, I've had friends both on the left and on the right chide me that by doing so I would forfeit my "moral authority". To these friends, Trump represents a lesser evil that is too evil or at least too unqualified to support. While in the past, these friends and people like them may have held their noses and voted for the candidate that at least shares a majority of their positions, it seems Trump is seen as either too damaged or not serious enough for this course of action. 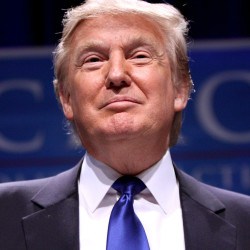 Who is the alternative to Trump? Who is the 3rd party alternative? Who is the independent alternative? That may be the question people will be asking themselves as the general election approaches.
It is clear that both Republican and Democrat voters are disillusioned by their parties. On the right, you have conservatives that have grown tired of hearing how things will change if only the Republicans gain control of the Senate, or the Congress, or the presidency or the Supreme Court. When they have control of these branches of government, they never seem to implement the promises to their voters.


On the left, the constant class warfare is getting old. The so-called millennials aren't buying the same ole lines. They want their utopia now. Bernie Sanders was becoming the vehicle for that realization until it became obvious that the DNC had already chosen Hillary Clinton to replace Barack Obama; after all, Obama kind of stole the election from Hillary in 2008. According to Democrat establishment politics, it's Hillary's "turn".

When I first began building content about my campaign, friends and supporters wondered why I didn't do more. I told them it is kind of silly to run a race with no competitors. At the time of October 5, 2014 when I announced my intent, there were no real challengers. So for me to do more than formulate my platform would have been futile.
It is now April 12, 2015. The 2016 Presidential Election Race has begun. We now have multiple declared Republican Candidates in Ted Cruz and Rand Paul. Democrat candidate Hillary Clinton officially announced today. The field is being set. READ The 2016 Election Race Begins! about The 2016 Election Race Begins!

Barack Obama was not elected as America's first post-racial or first black president. Obama is America's first revenge president. He was elected by both black and white Americans in hopes of dishing out payback for America's past of racial inequalities and prejudices. Many who elected Obama wanted him to get back at America. They wanted him to take from those who supposedly had been oppressing them and give it to the oppressed. They wanted him to "redistribute the wealth" and redistribute everything else they think was being withheld from them. To this end, Obama has been working ever since his election in 2008.

Some day America will have its real first black president; or rather its first president that happens to be black. This president will not spend years trying to divide people while using false platitudes of making people "pay their fair share" but rather this real first black president will use his or her time in that honorable yet humbling office to highlight that before any American is any pigment of skin or any hyphenated group, every one of us is part of this one great nation. This first black president will not spend time trying to exact revenge (wink, wink) on certain classes or colors of Americans, but rather will spend time highlighting the fact that America really is the land of opportunity. READ The First Revenge President about The First Revenge President

Roderick Edwards - Citizen President 2016 - It's Time to Be America Again

It does NOT require that you have lots of money or have been part of the political class for years and years. So why do we keep electing people who are so UNLIKE us?