Ending Evil: The End of Islam 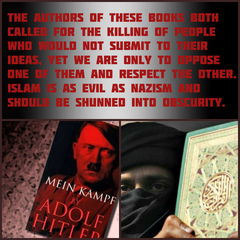 During the rise of Adolph Hitler and the Nazis, had they simply remained peaceful and advocated a message about how great it is to be German and live in Germany, there would have been no cause for World War 2. But when a person begins to call for followers to violently impose ideas on other people, to the point of killing them, then the world cannot just sit by and "respect" such an ideology. This goes for political AND religious ideas.

Now, before anyone attempts to make the argument, while followers of any ideology can and do often twist the message and intent of the founder of the ideology, this is not the case with Islam. Muhammad himself did violence against people and told his followers to do violence. So pointing out how "Christians did this or that" is not the same. People saying Islam is misunderstood or that groups like ISIS are not "true Muslims" are either woefully ignorant about Muhammad's actions or they are purposely lying to cover up.

Here is a quick summary of Muhammad's life: (most content credited to http://www.thereligionofpeace.com/pages/history.htm)

"The Prophet had suddenly attacked Bani Mustaliq without warning while they were heedless and their cattle were being watered at the places of water. Their fighting men were killed and their women and children were taken as captives" (Bukhari 46:717)

"The Messenger of Allah (may peace be upon him) said: If you come to a township (which has surrendered without a formal war) and stay therein, you have a share (that will be in the form of an award) in (the properties obtained from) it. If a township disobeys Allah and His Messenger (and actually fights against the Muslims) one-fifth of the booty seized therefrom is for Allah and His Apostle and the rest is for you." (Sahih Muslim 4346)

"Allah's Messenger called Ali [and said]: “Proceed on and do not look about until Allah grants you victory,” and Ali went a bit and then halted and did not look about and then said in a loud voice: “Allah's Messenger, on what issue should I fight with the people?” Thereupon he (the Prophet) said: ”Fight with them until they bear testimony to the fact that there is no god but Allah and Muhammad is his Messenger…"(Sahih Muslim 5917)

Muhammad's follower's would often rape the women of the defeated group as part of their "share". How is this defensive? But still some defenders of Islam (usually at this point non-Muslims) will say that this type of violence is seen in other religions like Christianity thus we cannot blame Muslims. The problem is, we're talking about the words and actions of the FOUNDERS of religions. After all, both the Bible and the Qur'an tells its followers to imitate the lives of their founders. So, if Christians truly imitate the life of Jesus they would be non-violent and advocate being at peace with all men if possible and forgiving people who wish harm upon them. In contrast, if a person imitates Muhammad, they will be a violent, vengeful person likely to think it is okay to have sex with children over 40 years younger than them. A "true Muslim", imitating the founder of Islam would most likely violently impose Islam on non-Muslims.

Okay, if we did shun Islam, how would that work? In the same way we shun Nazism or the KKK or other such violent hate groups. We do not call for "respecting" Islam. We constantly talk about the reality of Muhammad's violent and sexually perverted history. We stop making TV shows that present Islam as a loving, peaceful religion. (Even an NCIS episode did this -- season 5 episode 11). Continuing to pretend Islam is just like any other religion and should be respected, is destructive.


But what about the backlash? Won't shunning Islam simply make more Muslims hostile toward us? Yes, it probably will but it will finally bring out the true nature of Islam. By their actions, they will simply validate the accusation that Islam is violent but eventually the violence will be stifled. More and more people won't want to be part of a violent death cult. More and more people will oppose Islam and stop pretending it is a religion of peace. Shunning of Christianity would not cause Christians to lash out. It would cause them to become less worldly and more close knit. Sometimes, the mainstreaming of religions actually cause more damage to them rather than when they suffer a bit of persecution.


During the 2016 U.S. presidential election, GOP candidate Donald Trump called for the temporary banning of all non-American Muslims entering the United States. This position has been met with accusations that Trump is like Hitler or the Nazis. The fact is, Islam or "true Muslims" is not compatible with liberty. Nothing in Islam allows a person to be governed by the laws of any other nation than an Islamic nation. Just look at the Constitutions of Afghanistan or Iraq or almost any predominantly Islamic nation. Right there in the Constitution there is always some line like:

"No law shall contravene the tenets and provisions of the holy religion of Islam..." (source)

The U.S. should have never allowed Afghanistan or Iraq to pen such an exclusionary Constitution. The so-called freedom that we were told we were bringing to these places could never materialize with such a restriction built into their Constitutions. While it is valid for a people to acknowledge there may be a higher power governing the universe, to make it so that people cannot operate outside this possibility is so restrictive that true advancement can hardly occur. (This coming from me, a committed predestinarian Christian)


In conclusion, the most important issue for this century is not "fighting terrorism" nor "climate change", it is making hostile, violent ideologies so unaccepted that they are forced into obscurity. There should be a full fledged media blitz from every nation to end Islam as a valid "respected" religion. Islam is a violent death cult that should not be carried on into the next century. Just think of the advancements the world could make in the future if we didn't have to live in fear that at any moment some "true" follower of Muhammad was going to blow up a plane or shoot up some busy venue. Islam has forced us to lose simple dignity and freedoms such as now having to be more or less strip searched at airports and other places. Islam caused Canada to require U.S. citizens have passports before entering Canada. We cannot continue to live in fear and MUST push back against Muhammad's 7th century death cult so that it goes the way of Adolph Hitler, Charles Manson, Jim Jones, David Koresh and so many other death cults and their leaders.